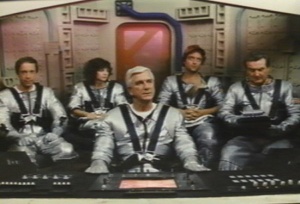 I have a DVD of a movie entitled Naked Space (also titled The Creature Wasn’t Nice), which is a mildly entertaining sendoff of various science fiction movies. It stars Leslie Nielsen as the captain of a ship on a mission to explore an uncharted planet. The crew discovers a creature who would soon grow up to become a dancing alien who sings “I Want To Eat Your Face”. The movie has its comedic moments but the fact Nielsen was cast as the captain illustrated his place in Hollywood as the leading man of comedy.
There were plenty of other movies in which I enjoyed his comedic presence, including Airplane, Naked Gun and even Dracula, Dead and Loving It. I especially enjoyed his Police Squad TV show and am still disappointed it never took off. No matter which role he played, it was pure joy watching him immerse himself in the comedy roles he so enjoyed. Surely, he will be missed.
Oops, I called him Shirley.