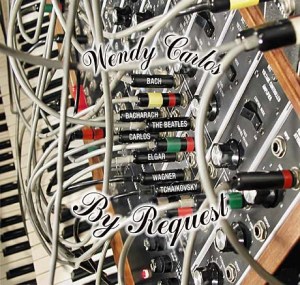 One of my favorite Wendy Carlos albums is By Request in which she performs familiar tunes on a Moog synthesizer. This album was released in 1975 and hasn’t stopped enchanting me since.

Here’s a breakdown on the tracks on offer:

1. Three Dances From “Nutcracker Suite” – The album starts with the Russian Dance before taking us to the Dance Of The Sugar-Plum Fairy and concluding the set with Dance Of The Reed-Pipes, all of them delightfully performed.

2. Dialogues For Piano And Two Loudspeakers – Basically a heated argument between piano and synthesizer. My father hated this track because of the electronic noises but I found it especially haunting. It painted vivid images in my mind, such as flying saucers, eagles falling from the sky and Sesame Street’s Mr. Hooper in distress. In fact, when I listen to this same track today, those same images come to mind.

3. Episodes For Piano And Electronic Sound – This picks up from where the previous track left off. The piano playing here is more heartfelt but the electronic sounds always find a sneaky way in with chaotic results.

4. Geodesic Dance (Electronic Etude) – After the piano and synthesizer call it a draw, it’s back to the music. Here Ms. Carlos manages to weave various musical tones and textures into a single tapestry she can call her own while still staying faithful to the familiar melodies.

5. Brandenburg Concerto No. 2 In F Major (1st Movement) – One of Bach’s more recognizable tunes, electronically realized. The variety of tones here is amazing.

6. “Little” Fugue In G Minor – Playing a fugue has got to be tricky but Ms. Carlos makes it sound easy. Again a good wealth of various tones integrated into one masterful track.

7. What’s New, Pussycat? – This is one of my favorite tracks on the album. The classic Tom Jones song benefits nicely from its electronic makeover and the playful music captures the mood of cats running amok in the recording studio.

8. Eleanor Rigby – I heard this version years before I heard the original song from the Beatles. Another favorite track.

9. Wedding March – A short and sweet track I really should’ve used at my own wedding.

This is a fantastic album that’s worth a listen. It just may be the best music you’ve never heard.