Not far from where I live in West Palm Beach is the newly opened Ballpark of the Palm Beaches, which serves as training camps for the Washington Nationals and the Houston Expos. I decided to venture over there during my bike ride.

On one side of the parking lot is a big red W, no doubt marking the entrance to Nationals territory.

And on the other side is a white H for Houston.

One thing I really like about the park is the sidewalk that runs behind the fields along the north side. One end starts at the entrance on Haverhill Road and runs to the other side on Military Trail while bypassing the traffic. Nice.

I really wanted to get a picture of one of the fields from outside the fence, but the fence was nearly covered with a screen-like fabric except for a bare section close to the ground. So I kneeled on the ground behind the fence, held the camera between the chain links and got this shot. 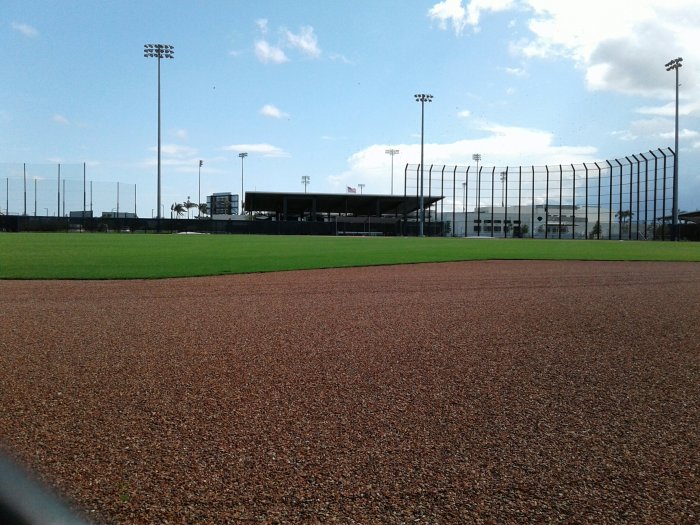 After taking this picture, I continued riding along the sidewalk when I saw a police car, also on the sidewalk, driving towards me. Did the officer see me kneeling behind the fence? The police car passed me by without incident so maybe this was just a coincidence. Either way I took nothing but pictures.

I’ll have to come back for another visit when the teams are in town. I’m also curious what goes on here during football season. In any case, I shall return.

These pictures were taken with a Samsung Galaxy On5 phone, with some of them taken in panorama mode.