For the longest time I’ve been curious how those solar dancing toys work. When exposed to light they dance merrily for as long as they have light shining on their integrated solar cells. I myself have several of these toys, including a dancing skeleton I bought from a dollar store. 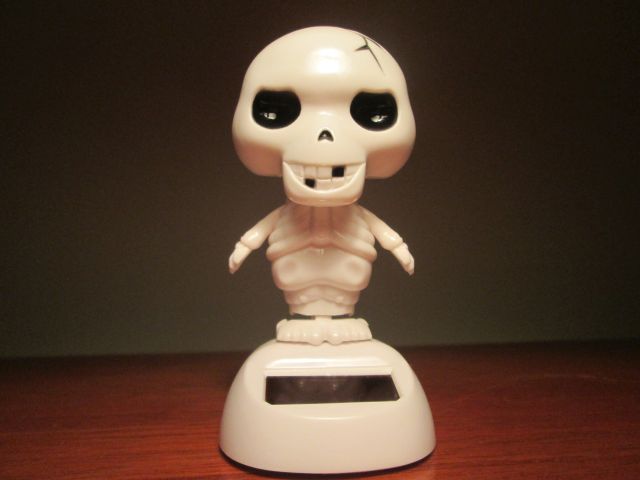 Recently the skeleton suffered a nasty fall to the floor and hadn’t been dancing as well as it was when I first bought it. I decided to see what repairs I could do and, at the same time, find out how these toys work.

After gently removing the base from the toy, the mystery was instantly solved. Inside the base is a coil of copper wire attached to a solar cell to create a very simple electromagnet.

And inside the toy itself is a small swinging rod with a magnet at the end.

Now it all makes sense. When light hits the solar cell, it activates the simple electromagnet that pushes the magnet around to create the dancing motion. I had no idea something so enchanting was so simple.

After finding nothing broken inside the base, I was able to easily re-assemble the toy but the skeleton’s movements are still minimal when exposed to light. I suppose I’ll have to wait until Halloween rolls around before I invest in a more livelier replacement.